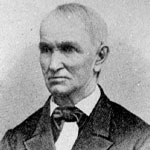 Dr. James Faulkner, one of the oldest residents of this county, and an estimable gentleman, died at his home in Dansville last Sunday. Dr Faulkner was born at Cambridge, Washington county, this State, January 2lst, l790. He came to Dansville January 11th, 1797, eighty-seven years ago, and has resided there since. When he came to Dansville the place was a wilderness and inhabited mostly by Indians. He practiced medicine for a while and was a surgeon in the American army during the war of 1812, the scene of operations at that time being on the Canadian frontier. Afterwards he abandoned his profession and engaged in active business pursuits. He was a member of assembly in 1825-8; afterwards judge of the old court of common pleas in Livingston county; was State senator in 1841-45 under the old constitution when there were only eight senatorial districts in the State, and the district from which he was senator comprised the territory which now includes several congressional districts in this portion of the State. He was appointed president of the first National bank of Dansville in 1854, the date of the organization, and held that position up to the time of his death Dr. Faulkner was born a short time after the adoption of the Federal constitution, and had lived under the administration of every Presdident of the United States, from Washington down. Of his children, two sons, James Faulkner Jr., and Lester B. survive him.