The militia company, Canaseraga Light Infantry, familiarly known as the Canaseragas, was organized in 1847 and disbanded fourteen years afterward, at the beginning of the civil war. They had held meeting in place that was known as Canaseraga Hall located on Main Street, south of the Maxwell block. It became one of the most famous companies of the state on account of the character and standing of its members and the superiority of its drill. Col. Timothy B. Grant, who had been one of the Union Grays in Rochester, was its captain during the entire fourteen years of its existence, except a very brief interval, and a more capable and thorough drill master than he was not to be found. He brought the Canaseragas to a skill and exactitude of maneuver and movement that surprised lookers-on, and infused them with a military spirit and community of feeling which held them together and made them cheerfully obedient. They were in demand at celebrations near and remote, and wherever they went excited admiration and cheers. They took the lead in social gatherings, and gave an annual ball Jan. 8, the anniversary of the Battle of New Orleans, which was the most important social event of each year. Not until war became inevitable was the company broken up, and this was because the most of them enlisted, to help save the country. It furnished the Union army with a large number of brave officers, who distinguished themselves in drill and march and battle.

The well-drilled and much-admired Canaseragas had mostly gone to the war when in April, 1862, the Washington Zouaves were organized as a local company with the following officers and privates: Captain, Charles Reeve; lieutenant, Henry Faulkner ; ensign, Theo. Chapin; 1st sergeant, Wm. Bulkley; 2d sergeant, James Williams; privates, James Edwards, Wm. Knowlton, Charles Niles, Henry Porter, Edward Readshaw, Edward Sweet, Eugene Sprague, Percy Jones, James Lindsay, Edward Niles, Jr., Wm. Readshaw, Charles Shepard, Wm. Spinning, Rockwell Lozier, John Wilkinson. How long this promising’ military organization continued is not on record. When the war closed the military spirit which it had excited perceptibly diminished in a short time. The returned soldiers devoted themselves to the arts of peace. Money was plenty and prices high, new industries were started and neglected old ones revived; every able-bodied man could get work at good wages, and from 1865 to Black Friday the country prospered as it never had before.

Coon, Wing  (  -1862) first local casualty of the Civil War. Pvt. Coon had died in Camp McGraw of typhus fever at age 22; he had never seen battle.

Lema, Albert S.  – died in the regiment at Gaines Mills; he did not survive the amputation of his leg

Grand Army of the Republic 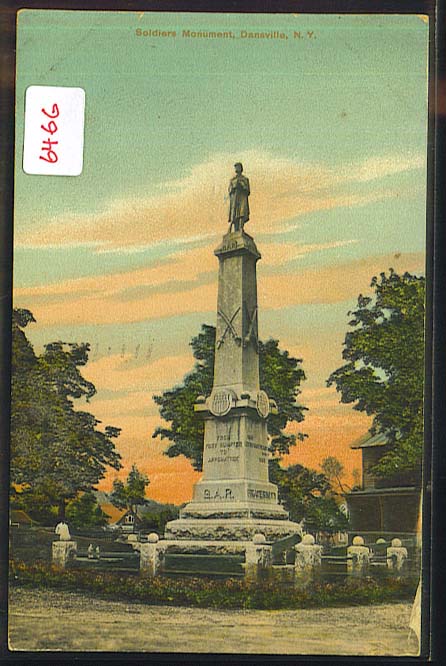 The Grand Army of the Republic (GAR) was a fraternal organization composed of veterans of the Union Army (United States Army), Union Navy (U.S. Navy), Marines and the U.S. Revenue Cutter Service who served in the American Civil War. Founded in 1866 in Springfield, Illinois, and growing to include hundreds of posts (local community units) across the nation (predominately in the North, but also a few in the South and West), it was dissolved in 1956 at the death of its last member, Albert Woolson (1850–1956) of Duluth, Minnesota. Linking men through their experience of the war, the G.A.R. became among the first organized advocacy groups in American politics, supporting voting rights for black veterans, promoting patriotic education, helping to make Memorial Day a national holiday, lobbying the United States Congress to establish regular veterans’ pensions, and supporting Republican political candidates. Its peak membership, at more than 490,000, was in 1890, a high point of various Civil War commemorative and monument dedication ceremonies. It was succeeded by the Sons of Union Veterans of the Civil War (SUVCW), composed of male descendants of Union Army and Union Navy veterans

GAR (Grand Army of the Republic) posts in Dansville: