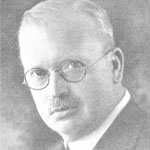 If anyone has ever adhered to the adage, “If at first you don’t succeed, try, try again,” Frederick Driesbach was that person. For nearly a quarter of a century, he tried, tried, and tried again to establish a hospital in Dansville. His first two attempts met with little success, but his third attempt finally took hold, and it was in large part due to his dedication and doggedness that Dansville has been home to a hospital building for nearly a century.

A distant relative of two other Hall of Famers, Daniel Faulkner and William Perine, he was born in South Dansville and educated at the Dansville Seminary (the building was erected in 1860 to accomodate the village’s first high-school-level educational facility). He later went to Geneseo Normal and thence to Columbia University, where he earned his medical degree in 1889. In 1890 he married Laura Bastian (who died in 1918, Then, in 1920 he married for a second time to Irene Leahy). 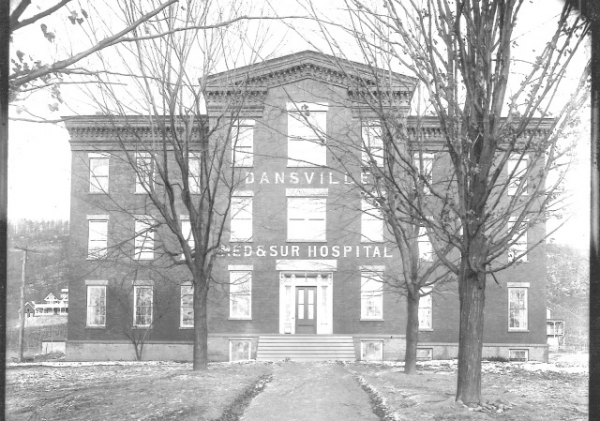 Upon obtaining his degree he began practicing in Dansville, initially in partnership with Dr. James Crisfield; later he would establish an office in his own home at 100 Main Street. From the outset, it was clear he was a man with an eye toward the future – he was the first physician in town to own an X-ray machine. In 1890, 25-year-old Driesbach and George L. Ahlers of Pittsburgh converted the now-vacant Seminary building into the Dansville Medical & Surgical Hospital. They served as medical supervisors with other physicians on the staff. For a while it prospered or at least got by, but financial difficulties eventually mounted and overwhelmed the facitity, and it closed in 1903. Dr. Driesbach returned to his Main Street practice, taking his X-ray machine with him, but he was not ready to give up on his idea entirely.

In 1905 another stab at a hospital was launched in the same building, this time to function primarily a hospital for epileptics.  Christened Glenwood Hospital, it would fail after just two years, only to be rededicated in 1908 as a cancer research hospital, with the support of Buffalo’s Dr. Roswell Park.  Frederick Driesbach was on the staff, as were Benjamin Andrews, James C. Dorr, and Charles V. Patchin.  Much to Driesbach’s disappointment, it went belly up after only a year.  (Years later, The Seminary building would become the King’s Daughters Home.)

The turning point came in 1913, in an unlikely place; a restaurant and inn.  In 1911 the Colonial Inn was opened in the former Bradner family mansion by Elizabeth Swartz, a former employee at the Jackson Health Resort.  She let rooms for both permanent tenants and visiting tourists and provided meals for both tenants and the general public.  In 1913 Dr. Driesbach approached Swartz with a request: that a portion of the Inn be converted into a surgical facility and some recovery rooms.  This unlikely collaboration proved surprisingly successful, a least for a while, but by1920, it looked as if things were about to go under yet again.

This time, however, Dr. Driesbach refused to give up, and with the help of Dansville Breeze editor Baynard Knapp and nurseryman William J. Maloney omong others, $100,000 was raised to purchase the entire building and transform it into Dansville General Hospital.  Driesbach would serve as medical chief of staff, with Swartz heading the dietary department.  Over the next half-century, the hospital (rechristened Dansville Memorial Hospital in 1948) would prosper and expand, until replaced by Nicholas H. Noyes Memorial Hospital in 1973.

In addition, Frederick Driesbach served as Livingston County Coroner from 1899 to his death in 1947. He was the first president of the Dansville Automobile Association, formed in 1915, and he served one term as Village Trustee (1899).