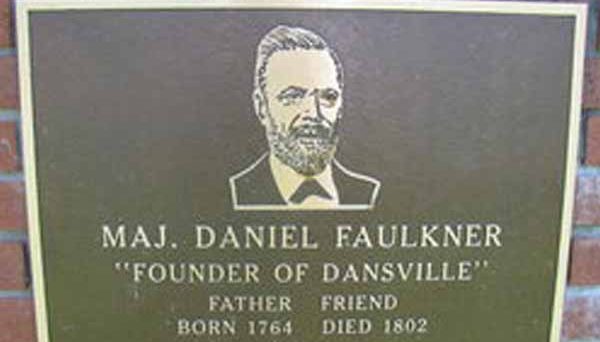 Taken at face value, his resume may not sound all that impressive… a few years as a storekeeper, and founder or the local militia. and his death, in 1802 at the age or thirty-eight, came barely more than a half-decade after he moved to the area. But there must have been something about the man… that lead his fellow pioneer to name their fledgling settlement after him.

Descended from the “Falkners” who came to America from Saxony in the 1600’s, Daniel was the fifth of eleven children; his father, John Faulkner Sr., fought in the Revolutionary War. Daniel worked as a surveyor for Charles Williamson, which brought him into the forests of upstate New York, and to a certain valley which still bore evidence of recent Seneca Indian habitation. 1796 he uprooted himself from Pennsylvania and returned to the valley, along with his brother James (another brother, Samual, would join them the following year; he was the father of Dr. James Faulkner, another Dansville Hall of Famer). With the proceeds of the sale of his Pennsylvania property (about $10,000), He commenced to setting himself up as the embyonic village’s first store keeper, bringing in loads of goods by sleigh from Pennsylvania and Albany. The store was located on the northwest cornerof Main and Ossian; he would also open a tavern across the street, and a sawmill a ways to the south. Many of the earliest settlers… some fiftheen families, it is said… came to settle here specifically by his encouragement. Later, he would organize a local militia… one of the first in the state… a group of 30 or so men christened the “Grenadiers” which would earn their commander the title “Captain Dan”.

It is not known exactly when his fellow pioneers elected to name their town after him; but by the time of the first official town meeting, held in 1797, the name “Dansville” had come into existence. Unfortunately, not long thereafter “Captain Dan”, his store having gone under (perhapshe had been a little too generous with his credit), was forced to temporarily abandon the village, and he returned to Pennsylvania to take up tarvern keeping and rebuild his furtune. He woud return to Dansville, only to Die of undisclosed causes in January 1802. He married Hannah Perine, daughter of Captain William Perine; their decendants number in the hundreds.