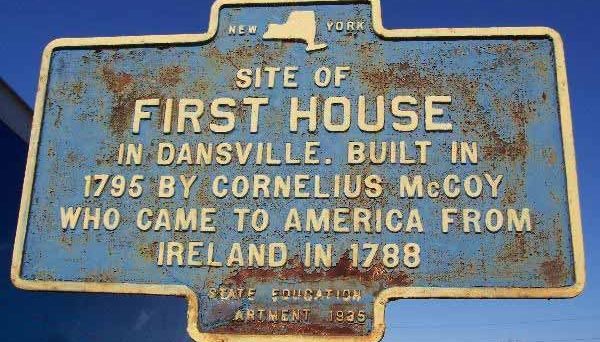 The first settler of what is now the village of Dansville (along with his family, of coarse; one could argue that all of them should share Hall of Fame honors) was born in Northern Ireland in (or around) 1763. In 1788 he married widow Mary McCurdy; that same year, he, his wife, and his three stepchildren (David, James, and Mary) immigrated to America, and settled for a time in Buffalo Valley, Pennsylvania (not far from where Daniel Shays touched off the infamous Whiskey Rebellion) as farmers. In June 1795, drawn by the lure of a fresh start on land that Charles Williamson had just opened up for development, the McCoys pulled up roots and purchased around 150 acres of land; they lived for a few months in an old surveyor’s hut before they could build their own cabin. The following year, stepdaughter Mary was wedded to William McCartney, in the first marrige in the history of the (still unnamed) village of Dansville. McCoy was only 46 when he died in 1809, but his family…the first family of Dansville…would be a central part of the local scene for generations. Stepson James would be a prosperous local farmer until his death in 1864; and the sons of William and Mary McCartney would go on to be successful local businessmen and politicians.