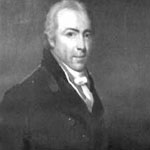 Charles Williamson was born on July 12, 1757, to Alexander Williamson, secretary to James Hope Johnstone, third Earl of Hopetoun, and his wife Christina Robertson, who lived on the estate of Balgray in Applegarth and Sibbaldbie Parish, Dumfriesshire. His family was prominent in local politics and business; Williamson’s father served as an agent for the Earl of Hopetoun, and his mother had many family connections including Sir William Pulteney and future Cabinet member Henry Dundas, Lord Melville.

At the onset of the Revolutionary War, Williamson purchased a commission as ensign in the 25th Regiment of Foot, and three years later did the same as captain. En route to the United States, his ship was captured and he was taken to Boston as a prisoner of war. As a non-combatant, and having sold his army commission, he was not imprisoned but confined to the home of Ebenezer Newell. There he was cared for by Newell’s daughter, Abigail, whom he married in 1781. The couple returned to Scotland soon after the wedding.

Williamson resided in Scotland for the next nine years where he occupied himself with farming and local politics. He was adventurous and ambitious, and soon grew bored with farming. Using his family connections, he sought government employment in London. The British government sent him on one information gathering mission through Marseilles, the Balkans, Russia and Turkey. He reported on the economic and cultural situations in Turkey, but no further missions were assigned. Eventually another opportunity presented itself when Sir William Pulteney formed Putleney Associates with a group of wealthy British speculators, including Patrick Colquhoun and John Hornby, to invest in land in the United States. They were interested in a large swath of land in western New York state owned by Robert Morris, a signer of the Declaration of Independence. There was a legal obsticle to this purchase though. At the time, aliens were not allowed to own property in the United States. This was remedied when Putleney Associates employed Charles Williamson, who was able to gain U.S. citizenship though his marriage, to act as agent for the sale and manage the land.

By the time the Williamsons set sail for the United States in 1791 they had three children, Christy, Alexander and Anny. The land Williamson was to oversee was largely undeveloped, and far from any other major settlement. The Pulteney Purchase, or Genesee Tract as it was known, was comprised of what are now Steuben and Ontario counties. Williamson’s responsibility would be to build roads, mail service, and other infrastructures for the vast area as well as to attract new settlers and parcel the land. He employed two aides from Scotland, Charles Cameron and John Johnstone to assist in these endeavors, and William Berczy (aka Guillaume Berezy, Wilhelm von Moll Berczy) to recruit laborers from Germany to farm and build roadways. A dispute with the German laborers slowed development, as did public fear of Indians, and officials in Canada who attempted a land grab of the southern shore of Lake Ontario. But Williamson forged ahead, creating the settlements of Bath, Williamsburg, and many others. Williamson spent over a decade in the area and became active in local politics, serving as a judge and state assembly member. He also continued to spend lavishly to build up and advertise of the settlements.

During his tenure, legislation was passed (reversing the previous law) which now allowed aliens to own real estate in New York state. In light of this, and what was seen as excessive spending on the part of Williamson, William Putleney Associates took possession of the land in 1800, and assigned lawyer Robert Troup as administrator. Williamson was paid a settlement and given significant sections of real estate as compensation. Having been relieved of his agency in New York state, Williamson returned to England where tension between France and Britain was growing over the Louisiana territory and French and Spanish possessions in South America. Williamson pledged his support to Britian and took part in a proposal to recruit recent British immigrants to form troops that would, in theory, attack Spanish possessions in Florida, Mexico and South America if needed. This enterprise was referred to as “the levy” in Williamson’s papers.

At some point during his residence in central New York, Williamson had made the acquaintance of Aaron Burr who also owned land in the area. Around the time Williamson was raising his troops, Burr had fallen into disrepute over his infamous duel with Alexander Hamilton and other political setbacks. Researchers posit that while Williamson was in New York City wrapping up the real estate transfer with Pulteney Associates, he and Burr spent time together. It was at this time that scholars believe Williamson became involved in what is known as the “Burr Conspiracy.” It remains unclear what Burr’s true intentions were. He was accused of treason by the U.S. government which believed Burr’s goal was to create an independent nation in the center of North America and/or the Southwest and parts of Mexico. Other scholary articles suggest that Burr engaged Williamson as an intermediary to deal with the British government.

Williamson was to convey Burr’s cooperation to the British, and outline his plan to take back Louisiana and parts of South America, which would also unitilize the troops raised by Williamson. During the years of 1804-1806, Williamson remained in England and did communicate with British officials including Anthony Merry and Lord Melville, but it does not appear that they ever formally responded to Burr’s proposal, and Williamson moved on to other ventures.

In June 1808, Williamson was again called to the service of the British government to pursue its interests in South America. Williamson was engaged to deliver confidential dispatches to the Duke of Manchester, governor of Jamaica, directing him to cooperate with Cuba in defending against a French takeover. Williamson delivered his dispatches in Jamaica in July of 1808, and then proceeded to Havana, Cuba, but was ordered to return to England at the onset of the Peninsular War. En route on the His Majesty’s Sloop Phelps, in September of 1808, Charles Williamson contracted yellow fever and died. His wife and children had been estranged for many years, and it was left to his brother, David Williamson, to settle the estate.