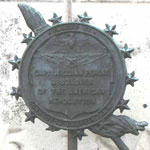 The mystery of Captain William Perine has been solved. Some weeks ago a request for information as to the burial place of this early Dansville citizen and Revolutionary soldier was published in these columns. Both the D. A. R. and the American Legion were anxious to locate the grave so that it might be appropriately marked.

Mrs. Addie Weiermiller of this village recalled that several years ago the Cohocton Chapter of the D. A. R. placed a marker at the Grave of Captain Perine in a rural cemetery above Stone’s Falls. This was done at the instance of two members of that chapter who are descendants of the Captain. Mrs. Weiermiller notified Mrs. Floyd M. Shepard, past regent of Corporal Joslah Chapter, D. A. R., and investigation proved the information to be correct.

The man who gave Perine, William and Elizabeth streets to Dansville and who, in his earlier days, was a captain under the famous General Francis Marion, is buried in Greenlawn Cemetery on Sandy Hill, together with other members of his family. In this same cemetery, which is fenced in and well kept up are the graves of other persons whose names are prominent in Dansville annals.