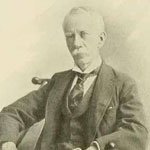 He was Dansville’s premier newspaper publisher of the 19th century, and a friend and supporter of both James Caleb Jackson and Clara Barton.  Today However, He is Best known as the author and publisher ofthe first comprehensive history of Dansville. 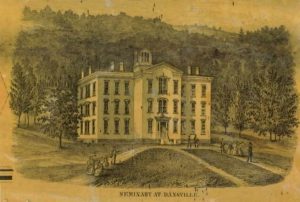 Asa Othello Bunnel was born in Lima.  At age 14, he came to Dansville to apprentice himself at the office of the Dansville Herald (which would eventually become Genesee Country Express).  In 1860, he launched his own paper, the Dansville Advertiser, of which he would be the owner, editor, and publisher for 48 years.  (His counterparts at Dansville’s other two papers…yes that’s right, Dansville once supported three thriving newspapers… were Oscar Woodfurr of the Express, And Joseph “Old Zimmerhackle” Burgess of the Dansville Breeze.)  Although he never sought public office, through his paper he would be the primary spokesman for the local Republican polotics for decades.  His Democratic countrpart was Oscar Woodruff of the Express; indeed, their respective newspaper offices were literally across the street from each other in the center of Main Street.  (The Bunnell Block Now houses the Star Theater.)  In addition, Bunnell served as secretary and treasurer of the New York Press Association; he co-founded the Coterie, a local literary/social club whose membership also included Clara Barton and Harriet Austin; he was a charter member of the Livingston County Historical Society (1875); and he was the first president of the Dansville Board of Trade (1889).

His lasting legacy, however, was the ambitious and comprehensive history of Dansville that he published in 1902.  Dansville 1789-1902, which includes a number of historical essays previously published in the Advertiser, covered the entirety of Dansville’s history, from the original Indian settlements to the highlights of the village’s first century of existence, and remains a primary source of information to anyone interested in Dansville’s heritage.

Bunnell, who had married Anna Carpenter in 1863, retired from Publishing in 1908, and spent his remaining years in his hillside home, “Top Col.” (Sadly, Tops Col burned to the ground in 1925, taking with it many irreplaceable historical records that bunnell had collected)